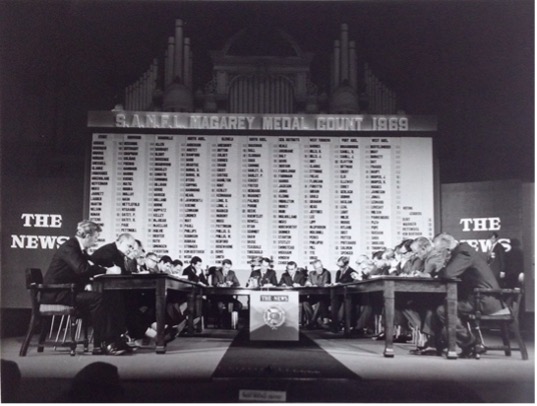 May 27, 2022 South Australian football this year marks the 145th anniversary of the founding of the game’s oldest league competition. It’s time to travel down memory lane. By Michelangelo Rucci NO ONE wants to

South Australian football this year marks the 145th anniversary of the founding of the game’s oldest league competition. It’s time to travel down memory lane.

NO ONE wants to live in the past, but it’s a good place to visit once in a while.

This year – in line with the 145th anniversary of the founding of the SA Football Association (now the SANFL) – the look back is grander than ever.

From June 3 – and with a trail from the State Library of South Australia to the Migration Museum at Adelaide Oval (including the largest collection of Magarey Medals in the President’s Room) to the National Wine Center – the SANFL History Center will run the biggest display of South Australian football’s past.

It’s all captured with the theme: ‘Our Football, Our People, Our Stories’.

‘Our footy’ – No game seems to change as much as Australian rules football, whether in rules, tactics or even how we remember it. Memory can play tricks or simply reshape itself from the glint of rose-tinted glasses. But the camera lens doesn’t lie, even if the digitized vision makes the game look much better than when we first saw it on analog TV.

The State Library has meticulously curated the exhibit at its North Terrace institution, where fans will find a “time machine” with visual presentations in two theaters. One is dedicated to footage – some being shown publicly for the first time – of matches that have become part of South Australian football folklore. The other will relive great moments off the field, like Magarey Medal counts.

‘Our people’ – The exhibition will also pay tribute to one of South Australia’s greatest ever players, Russell Ebert, four-time Magarey medalist and Port Adelaide Games record holder, who died in November last year. Salvaged, enhanced and enlarged to become the focal point of the exhibit, a 1970s promotional photograph of Ebert in South Australia State’s famed Guernsey Red team.

SANFL’s History Center and State Library will also honor award-winning photographer Bryan Charlton, who passed away last year. His dedication to preserving images of the game involved more than his sharp eye behind the lens of Australia’s major metropolitan newspapers. He has also played an important role in developing the catalog of photographs secured by the SANFL History Center since its opening in 2014.

By popular demand, the seven-metre panoramic image of Adelaide Oval in Showdown mode – taken by Charlton after carefully seeking the right vantage point across the Oval – returns for this year’s exhibition after captivating fans in 2017.

From the collection of the State Library, the exhibit will include the Magarey Medals of 1929 winner Bob Snell and 1932 champion Max Pontifex which were donated to the library by their respective families and other significant pieces of memorabilia from soccer.