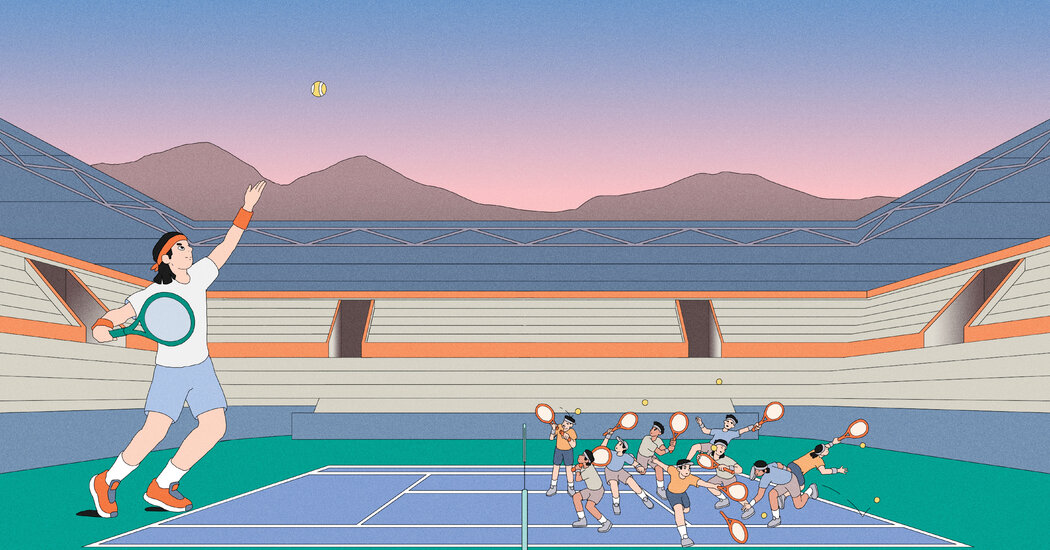 Federer, Nadal and Djokovic have also distinguished themselves by their deep involvement in tennis politics. Stars of the 60s and early 70s, like Arthur Ashe, were very active politically, but they were trying to revolutionize

Federer, Nadal and Djokovic have also distinguished themselves by their deep involvement in tennis politics. Stars of the 60s and early 70s, like Arthur Ashe, were very active politically, but they were trying to revolutionize the game. As tennis money exploded, the best players tended to focus on their careers. The big three are returns to that earlier era. Federer served as ATP player council chairman from 2008 to 2014, and Nadal served on the board for four of those years. Djokovic was elected president in 2016. Now that they are nearing the end of their careers, they seem determined to exert as much influence on the way the game is administered as they have on the way it is played, which makes it another battleground in their rivalry.

The first sign of contention came two years ago, when Djokovic was part of the faction that ousted Kermode from his ATP presidency. Federer and Nadal opposed the move and soon joined the player council, which was still chaired by Djokovic. Obviously, the atmosphere at the meetings was cordial, but the three men were guided by very different impulses. Federer and Nadal were institutionalists by nature, ATP-friendly and generally happy with how tennis worked. Djokovic, for his part, believed that a drastic reform was necessary, starting with an independent representation of the players.

Regardless, with Federer and Nadal returning to the board and the issue of cash prizes once again spinning the tour, it was thought the Big Three could reprise the role they played in 2012 and 2013 and strike another deal with. the majors. When I asked Pospisil what he thought about it, he said he was in favor of anything that would get a fairer share of the players. But he went on to say that it is best to leave the negotiation of prize money to lawyers and tennis needs to move away from making ad hoc deals behind the scenes. He also questioned whether Federer would be ready to take a tough line with the majors. He noted that the Swiss star and his management company were behind the Laver Cup, an annual team competition. Tennis Australia, which manages the Australian Open, and the USTA were both investors in the event, which meant that Federer was now in business with two of the four majors. Pospisil insisted he did not question Federer’s integrity – “I have incredible respect for Roger, both as a player and as a human being” – but said that the players needed an unambiguous defender on their side. “We can’t have someone negotiating cash prizes on behalf of players who have a conflict of interest,” he said. (Federer did not respond to a request for comment.)

In any case, any hope there was that the Big Three would forge a united front was dashed when Djokovic and Pospisil announced the formation of the PTPA on the eve of last year’s US Open. “The Professional Tennis Players Association (PTPA) did not come across as combative, to disrupt or cause trouble inside or outside the tennis tour,” Pospisil tweeted. “Simply to unify the players, make our voices heard and have an impact on the decision taken to this effect [sic] our lives and our livelihoods. To mark the occasion, Pospisil and Djokovic, along with around 100 other players, gathered on a court at the National Tennis Center for a group photo. The majors, along with ATP and WTA, issued a statement condemning the move. “Now is the time for even greater collaboration, not division,” they said. On the same day, Federer and Nadal circulated a letter, signed by them and several other members of the players’ council, which read: “We are against this proposal because we do not see how it really benefits the players and it puts our lives on tour and safety in major doubt. By this point, Djokovic and Pospisil had both resigned from the board.

A former ATP executive recently told me that Djokovic’s actions were at least partly rooted in his rivalry with Federer and Nadal – the fact that he was always presented as the odd one out, the third man, the bad guy. This person, who asked to remain anonymous because he is on good terms with all three players, said being the guy everyone was rooted for had accustomed Djokovic to criticism and encouraged him to go his own way. . “Novak is used to pushing things up the hill,” he said. “To be in front of a stadium of 16,000 people at Wimbledon or in Paris when everyone is screaming for Rafa or Roger and the whole world is against you and you kick their ass – Novak doesn’t care [expletive]. The former ATP officer said Djokovic was driven by a sincere desire to help his competition, but the PTPA was also a ‘legacy game’, another way to cement his place in history. C was also a way to assert his leadership in the locker room – to signal that he, not Federer or Nadal, was now the most powerful figure in sport. The executive suggested that was a message addressed as much to his two rivals as to anyone. “Some things are personal,” he said.

In a recent email exchange, I asked Djokovic if he thought Federer and Nadal could be persuaded to support the PTPA “Roger and Rafa are both great competitors, and I respect their individual opinions”, Djokovic replied, adding that he hoped his rivals would. “Keep an open mind on the PTPA movement. “

It’s not the first time players have filed for divorce from ATP In 2003, a group led by Wayne Ferreira of South Africa and Laurence Tieleman of Italy and Belgium formed a players-only organization called International Men’s Tennis Association, or the IMTA It grew out of the same grievances that drove the PTPA: frustration over the money and dissatisfaction with the ATP “There have been a lot of issues with the way the ATP has handled things. Tieleman told the Los Angeles Times. A number of players, including Lleyton Hewitt, ranked No.1 at the time, have expressed their support. But the IMTA never gained traction. The players were unable to unite around a strategy, nor were they willing to donate the resources to continue the effort.