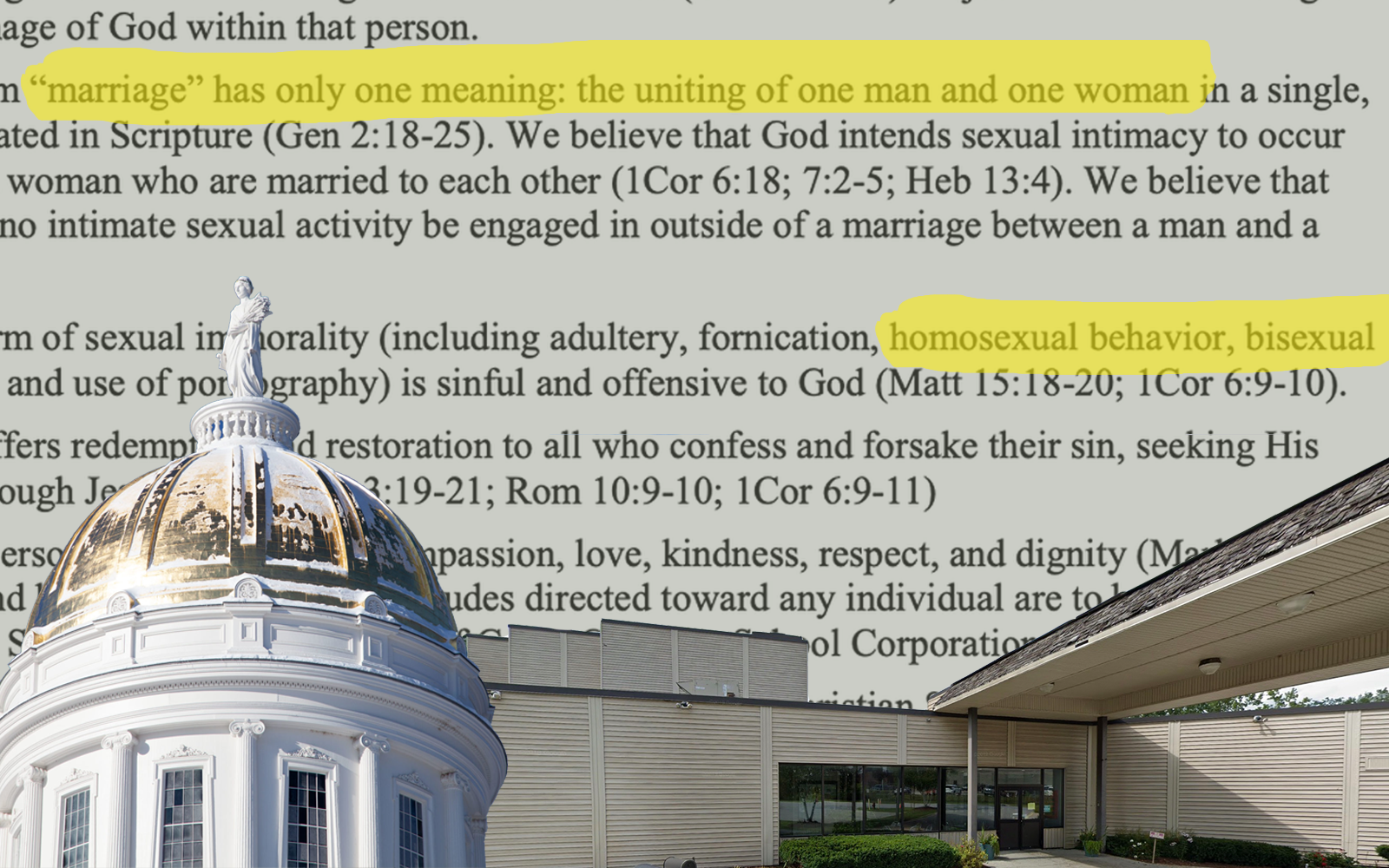 Last spring, the Vermont Department of Children and Families launched an investigation into Grace Christian School, a private school and pre-K program in Bennington.

Rebecca Holcombe, a former education secretary from Vermont, had tweeted a screenshot of the school’s family manual, which called homosexuality and bisexuality “sinful and offensive to God” and stated that “rejection of one’s biological sex is rejection of the image of God in that person “.

Sean Brown, the commissioner of the Department of Children and Families, determined that Grace Christian was not breaking state rules.

But the survey underscores the uneasy coupling of public money and religious schools in Vermont. And it highlights an unstable area of ​​state law — one that lawmakers declined to clarify during this year’s legislative session.

“We’ve had parochial schools in the state since the dawn of time, basically,” said Peter Teachout, professor of constitutional law at Vermont Law School. But when public money comes into play, “it becomes quite difficult to administer fairly and efficiently”.

In sparsely populated Vermont, thousands of students live in towns that do not operate schools at all levels. School districts in those cities instead use money from the state education fund to pay students who attend public or private schools elsewhere — sometimes even out of state or country.

under the aegis of the state ConstitutionVermonters cannot be forced to support religious practices they do not believe in. For years, the state prohibited school districts from using public money for religious school tuition.

But following a 2020 U.S. Supreme Court ruling, a series of court rulings effectively overturned that ban. Since then, Vermont’s sending districts have operated in a gray area, caught between those recent court rulings and the state constitution.

“It’s not necessarily consistent across the state how (districts) handle it,” said Sue Ceglowski, executive director of the Vermont School Boards Association. Local districts are “definitely” on their own in interpreting laws, she said.

But what is clear is that public money has already started flowing to religious schools. According to data provided by the Vermont Independent Schools Association earlier this year, 14 students used about $150,000 in public tuition to attend religious schools during the 2020-2021 school year.

One of these schools was Grace Christian School. The Bennington school received $7,250 in public tuition in the 2020-21 school year, according to data from the Independent Schools Association. Public money also subsidizes tuition for children in Grace Christian’s preschool program.

“We love and respect everyone”

In April 2021, after receiving a complaint when the school textbook was revealed, the Vermont Department of Children and Families launched an investigation to determine whether Grace Christian had discriminated against future LGBTQ+ students.

The state investigation focused only on Grace Christian’s preschool program, which is bound by a different set of state rules than schools. But the textbook in question also applied to students at higher levels.

Grace Christian’s textbook claimed the right to refuse admission to a pupil “if the atmosphere or conduct within the home or the activities of the pupil are contrary or contrary to the biblical style of life which the school teaches “, according to a copy of the book received through a public records request from the Ministry of Children and Families.

“This includes, but is not limited to, participating in, supporting, or condoning sexual immorality, homosexual activity, or bisexual activity; promoting such practices; or being unable to support the moral principles of the school,” says the school textbook.

The school also required parents of prospective students to sign a “declaration of faith”, which included a provision stating that homosexuality and bisexuality were “sinful and offensive to God”.

After completing the investigation, officials found that the school violated department rules against discrimination. But the administrators of Grace Christian have appealed this decision.

Grace Christian principal Micah Hayre had just started the job at the start of the 2020-21 school year, the school argued, according to an investigation summary written by state officials.

Due to the “all-consuming nature” of the pandemic, the school had not had the chance to update its textbook online. During the investigation, the school removed the document from its website and revised its statement of faith.

Administrators argued that the school had never refused admission to anyone; instead, Grace Christian was herself the target of a “witch hunt,” Hayre said in a letter to the commissioner.

“We love and respect everyone, just as Jesus did,” Shawn Smith, a Grace Christian administrator, wrote in another letter to state officials. “We welcome anyone who wishes to hear the Gospel and biblical teaching regarding marriage and sexuality.”

In November, Brown, the commissioner of the Department of Children and Families, sided with the school, citing the “trustees’ testimony of how you love and support all children and families” and their willingness review school materials.

In an email to VTDigger, Smith said the department’s initial decision came as a “total shock.”

“We are grateful that after further investigation, the state has licensed GCS and acknowledged that we welcome all students,” he said.

The current school textbook is no longer available online. Smith declined to email a copy.

Grace Christian’s statement of faith, which can be found on the school’s website, now says that “God wonderfully and immutably creates each person as male or female,” and that marriage is “exclusively the union of a man and a woman, and that intimate sexual activity must occur exclusively within this union.

“We believe that every person should be blessed with compassion, love, kindness, respect and dignity,” reads the final affirmation.

Parents must sign the statement to show they understand the school’s values, Smith said in his email, but “they don’t have to have the same beliefs.”

Macie Rebel-Kidwell, spokesperson for the Department of Children and Families, said the agency is working to balance Vermonters’ freedom of religion with prohibitions on anti-LGBTQ+ discrimination.

“The Department works every day with individuals and organizations with religious beliefs who may implicate state departments and regulations, and we do so with respect for different religions and in support of the right to religious freedom” , said Rebel-Kidwell. “We also work every day to support families and children in the LGBTQ community to prevent discrimination and meet the needs of those we serve.”

Bor Yang, executive director of the Vermont Human Rights Commission, which investigates allegations of discrimination, stressed that she could not comment on Grace Christian or any other specific situation.

In general, she said, “prima facie discriminatory policies (are) significant and relevant evidence of discrimination”.

“They are dangerous because they will exclude people before those people have even had a chance to apply,” Yang said.

In theory, independent schools in Vermont are already bound by the state’s public housing law, which prohibits discrimination in a wide range of institutions and businesses.

Additionally, the State Board of Education, which oversees independent schools, recently released new rules which will explicitly require schools to affirm that they do not discriminate in order to receive public funds.

But some state officials and lawmakers suggest those measures aren’t strong enough.

Although the state’s public housing law is broadly interpreted to cover both public and private schools, “some legal minds have suggested that may not be clear,” Yang said.

There could also be legal questions about whether the state Board of Education has the authority to withhold public money from schools in cases of discrimination, said Teachout, a professor at Vermont Law School.

When it comes to questions about public money and potential discrimination in religious schools, “there should be a simple and straightforward legislative process to make those decisions,” Teachout said.

Earlier this year, the Vermont Senate passed a bill to create this process. The bill would place safeguards over public money in religious schools and strengthen potential weak spots in the state’s anti-discrimination rules.

Once in the House, however, this bill stalled. School administrators and the Vermont chapter of the American Civil Liberties Association had urged lawmakers to wait for an upcoming U.S. Supreme Court ruling in a case involving Maine’s public school system, which is expected to have legal ramifications in Vermont.

“Precisely because this legislation involves so many of our deepest commitments, the General Assembly cannot afford to err on (the bill),” Harrison Stark, an attorney at the ACLU of Vermont, wrote in testimony submitted to legislators.

stark later clarified that the ACLU supported efforts to pass anti-discrimination legislation during the current session.

But last month, lawmakers on the House Education Committee declined to do so.

One of the committee’s biggest concerns was to make sure that “we didn’t do something that created (an) immediate sense of satisfaction” that ended up “going against the goals of the anti-discrimination,” Webb said.

“I’ll never understand why the House leadership and the House education leadership aren’t moving forward with (this),” said Sen. Brian Campion, D-Bennington, who lobbied for passage Bill. “Especially considering all of the attacks on LGBTQ students and adults in this state, across the country.”

If you want to keep tabs on Vermont education news, sign up here to receive a weekly email with all of VTDigger’s reports on higher education, early childhood programs, and school policy. K-12 education.