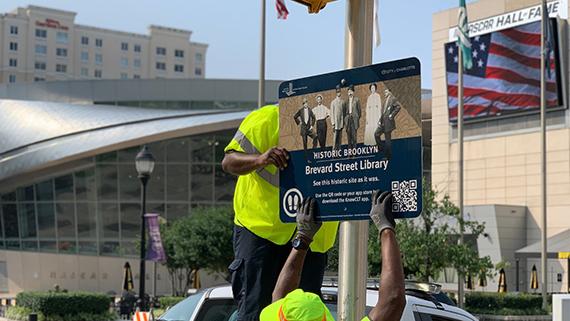 PHOTO | LEVINE MUSEUM OF THE NEW SOUTH Workers install a sign in Second Ward as part of the Levine Museum of the New South’s KNOWCLT app, which launched on August 7 with a virtual

The Levine Museum of the New South took a new step in on-site education with the launch of the KNOWCLT app on August 7. The museum collaborated with the James B. Duke Library at Johnson C. Smith University to create the app, with development and design produced by the Charlotte-based nonprofit Potions & Pixels.

The app, which is free and available for iPhone and Android devices, expands the museum’s exhibition “Brooklyn: Once a city in a city”.

KNOWCLT highlights seven historic places in Brooklyn, which users can access by walking through Second Ward or remotely. Brooklyn was once a thriving black neighborhood in the heart of Uptown, emerging in the early 1890s and swept away by gentrification in the 1960s. The city nominated Brooklyn for urban renewal, forcing longtime residents and businesses out .

“We really contributed to the city’s conversation about the economy, taking a closer look at neighborhoods and how they’ve evolved over time,” said Eric Scott, director of exhibitions and digital experiences at the Levine Museum.

Brooklyn’s past is shared through photos, storytelling, augmented reality, spoken word, and oral histories from former residents. On foot, users can stand in front of the former Second Ward High School and the Brevard Street Library, with their screens detailing what the sites looked like.

“We’ve been moving in this direction for a very long time,” said Willie Griffin, historian of the Levine museum. “The museum started out as a museum without walls. Museums are always trying to update and keep pace with all the latest developments and digital media, digital platforms.

Griffin said Charlotte has been criticized for destroying her story rather than preserving it. He said the museum’s approach to preserving history is through digital reconstruction.
“It allowed us to go out to a place and reconstruct something using augmented reality with photographs so that people actually see what a community looked like,” Griffin said. “These structures, these seven sites that were in Brooklyn, and you can actually learn more about those sites. It allows us to truly, truly become a museum without walls.

User-friendly
Tech might be the wave of the future, but it’s still a work in progress for some members of the community, especially older members who may not be so tech savvy.
“The app really holds your hand,” said Michael Zytkow, founder of Potions & Pixels.

Zytkow said they intended to make the app accessible from the start. The developers have integrated tutorials and the app tells the user where to stand and where to aim the smartphone’s camera to capture QR codes.

“It’s mostly food focused because we thought it would be the most accessible and everyone loves food,” Zytkow said.