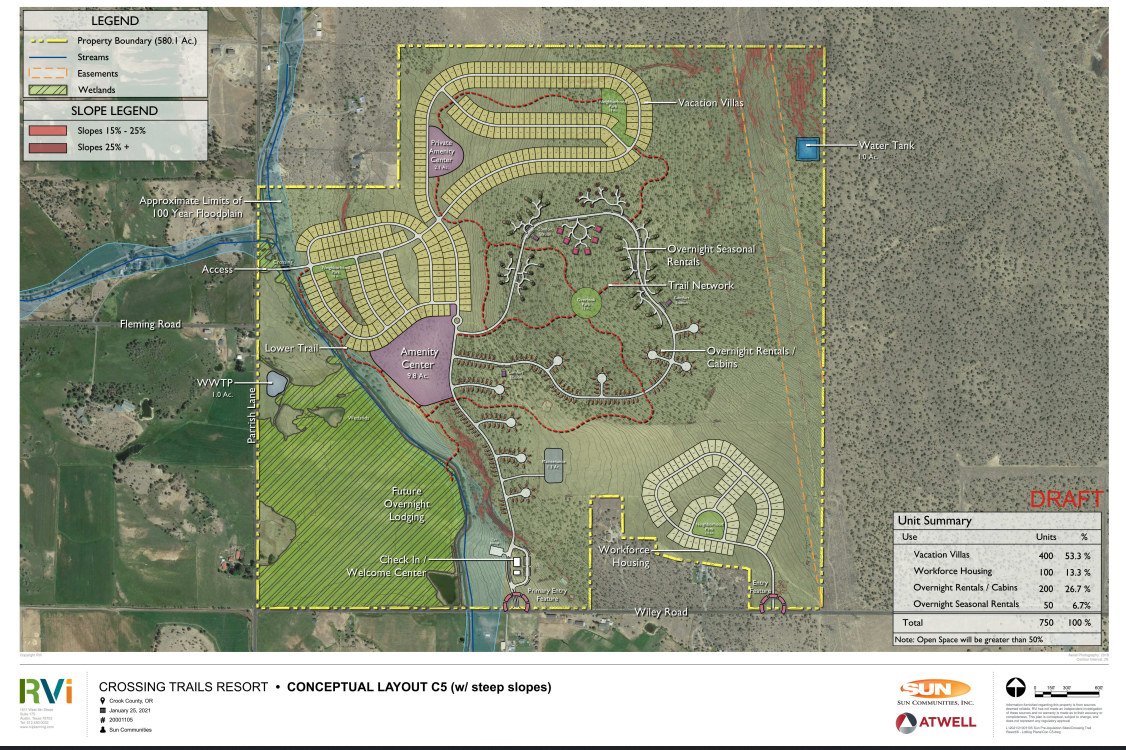 POWELL BUTTE, Ore. (KTVZ) — Emotions ran high among the packed crowd at the Powell Butte Community Center Tuesday night over topics including traffic and water. Residents have expressed concerns and criticism about the significantly revised destination station that may be coming to their community, called Crossing paths.

The proposed 580-acre resort, at the intersection of Wiley Road and Parrish Lane, approximately one mile north of Highway 126, would include a total of 400 vacation villas and 200 overnight rentals/cabins, 50 vacation rentals for the night and 100 housing units for the workforce. .

The plaintiff is Sun Communities Inc., a Michigan-based company, the same Bend LLC as owner, but a different plaintiff than the original proposal.

Crook County planning staff said changes needed to be made as the current applicant wants to make significant changes to the original approval. Most important in the modifications, there will be no golf course and it will add some amenities, such as a clubhouse or a restaurant.

Crook County officials approved a conditional plan in 2008 for a resort that would have been built around an 18-hole golf course. But in their January application for a variation of that approval, the developers noted that “the applicant has a history of developing high-quality resorts that target a very different market segment – the average family – that does not focus not about golf as a recreational activity.”

Yet another resort is not something some area residents want or feel necessary.

“People move to Powell Butte and have cattle businesses and farms and raise families here for a special reason,” President Scott Shadow said. “The area already has plenty of resorts. I guess I don’t see why we really need another one.”

The county’s conditional approval for a development plan for Crossing Trails was appealed by several people to the state Land Use Appeal Board, which rejected the petitioners’ arguments in a decision at the end of 2009.

A Crook County Planning Commission hearing on the amended resort plan is tentatively scheduled for Wednesday, July 27 at 4 p.m. at the County Annex. But given the size of the crowd that turned out on Tuesday night, some planning commissioners said they might need a bigger venue.

Participants were advised by Seth Crawford to seek legal assistance for the upcoming hearing.

“I have no hope,” said one attendee, to cheers from the crowd. “I feel like the plaintiff has already played it, handed it to him. We don’t seem to be in luck unless we have a lawyer to represent us.”