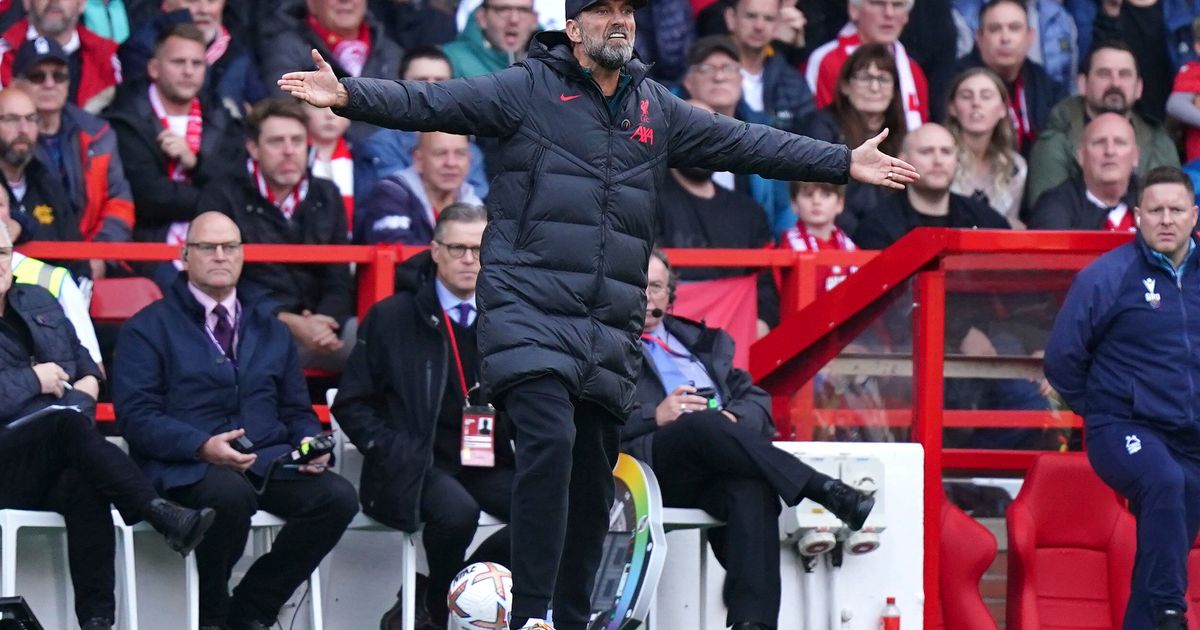 MANCHESTER, England (AP) — Liverpool’s mini revival came to a halt on Saturday with a 1-0 loss to relegation-threatened Nottingham Forest in the Premier League. But Chelsea and Manchester United continued to progress under respective

MANCHESTER, England (AP) — Liverpool’s mini revival came to a halt on Saturday with a 1-0 loss to relegation-threatened Nottingham Forest in the Premier League.

But Chelsea and Manchester United continued to progress under respective managers Graham Potter and Erik ten Hag after a 1-1 draw at Stamford Bridge.

Meanwhile, Erling Haaland put last week’s blank against Liverpool behind him to send Manchester City within a point of league leaders Arsenal with a 3-1 win over Brighton.

Liverpool manager Jurgen Klopp might have thought his side’s win over City last weekend would be a turning point after such an unconvincing start to the season, especially after following it up with three more points against West Ham in midfield. week.

But the defeat at Forest raises fresh doubts over Liverpool’s ability to mount a credible title challenge.

Taiwo Awoniyi, who spent six years at Anfield without ever playing for the first team, hit the second-half winner to relieve the pressure on Forest manager Steve Cooper, who was previously on the coaching staff at Liverpool.

The win moved Forest off the bottom of the table and left Klopp lamenting the latest setback.

“(It seems) as low as it gets,” the Liverpool manager said. “Massive, massive blow because I have no idea how we can lose this game to be honest. Not that we played exceptionally well, not that I expected it, but it would have been good.”

Liverpool were without the injured Darwin Nunez and Thiago Alcantara, who was ill.

Chelsea and United failed to take full advantage of Liverpool’s latest stumble after sharing the points in the late kick-off.

While the draw wasn’t ideal for either team, it suggests that Potter and Ten Hag continue to impose their authority on their respective teams.

Potter is unbeaten in eight games since taking over from Thomas Tuchel last month, while Ten Hag has picked up 10 points in clashes with four main rivals Liverpool, Arsenal, Tottenham and Chelsea.

“I have to give my team a big compliment,” Ten Hag told BBC Sport. “To fight back with a fourth game in 10 days, you see the spirit and the way they deal with setbacks. Very well.”

Defending champion City swept away defeat at Anfield with Haaland back on the scoresheet.

The Norwegian striker’s failure to find the back of the net against Liverpool was the first time he had gone without a goal since the second game of the season.

Haaland made up for that against Brighton, scoring twice to take his tally since joining City to 22 goals in 15 appearances in all competitions. He has scored 17 Premier League goals so far this season.

He looked set to score his fourth hat-trick of the season but couldn’t add a third goal, Kevin De Bruyne sealing the victory with an impressive strike after Leandro Trossard netted one.

Not that Guardiola wasn’t happy with the goal.

THE FEAR OF VARANE’S WORLD CUP

Raphael Varane left the pitch in tears after an injury that could jeopardize his World Cup hopes.

The French defender was visibly uncomfortable as he left the pitch after 60 minutes of United’s draw at Chelsea.

Ten Hag was unable to clarify the extent of the injury.

“It’s hard to say how it is now because it’s so soon after the game,” he told BBC Sport after the final whistle. “We have to wait 24 hours and we will know what it is.”

Dominic Calvert-Lewin scored for the fifth time against Crystal Palace in a 3-0 win for Everton.

The win ended a three-game losing streak for the Frank Lampard-led side and sends them four points clear of the relegation zone.

James Robson is on https://twitter.com/jamesalanrobson