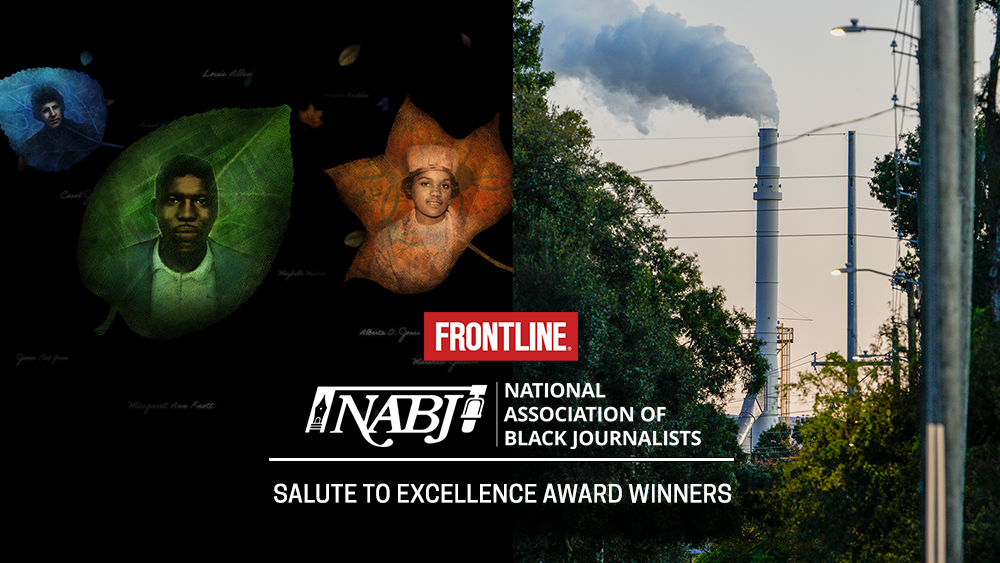 Announced at NABJ’s annual career fair conference and gala — held this year in Las Vegas, Nevada — the Salute to Excellence Awards are renowned for honoring the journalism and communications that best cover the black experience or address issues affecting the global black community.

Unresolved, FRONTLINE’s 2021 cross-platform project, was honored at the gala with a Digital Media NABJ Award in the “Interactive: Feature” category. In the award-winning augmented reality and interactive web installation, audiences step into a forest of quilted memories to learn about four people whose untimely deaths have been re-examined as part of a federal effort to address the legacy American racist murders through the Emmett Till. Unresolved Civil Rights Crimes Act. From there, the public can explore all of the more than 150 names associated with the Till Act, brought together for the first time in an accessible public forum: suffrage advocates, veterans, the first black female prosecutor in Louisville, Kentucky, landlords business, mothers. , fathers and children.

To create the AR installation and digital interactive components of UnresolvedFRONTLINE in partnership with Pictures of Ado Atoa leading mixed reality studio founded by an artist, filmmaker and technologist Tamara Shogaolu. The project was produced by award-winning filmmakers Dawnbringer (John Lewis: good problem; Gideon’s Army) and Raney Aronson-Rath (executive producer and editor, FRONTLINE). Earlier this year, Unresolved was also honored with a Scripps–Howard Prize and one Emmy Nomination for News and Documentaries.

“We are proud to have collaborated with Tamara and her Ado Ato Pictures team to bring Unresolved to life and commemorate the victims of racial violence featured throughout the project,” says Aronson-Rath. “We are delighted to see Unresolved be recognized by the National Association of Black Journalists and are grateful to our partners at StoryCorps, Black Public Media, Northeastern University’s Restorative Justice and Civil Rights Project, and PBS and GBH, CPB who championed this experimental storytelling.

In addition, “Poisoned», a series of investigations by the Tampa Bay Weather in collaboration with FRONTLINE Local Journalism Initiative, won an NABJ Newsroom Staff 101-200 Award in the “Investigation” category. Of Time reporters Corey G. Johnson, Rebecca Woolington and Eli Murray, the series, which also won a Pulitzer Prize and one George Polk Awardrevealed what happened to hundreds of workers at the Gopher Resource lead smelter in Tampa, Florida who were exposed to dangerous levels of lead.

“We are also delighted to see the amazing and urgent reporting from our local journalism partners at Tampa Bay Weather be hailed by the NABJ,” adds Aronson-Rath. “We share this great news with the John S. and James L. Knight Foundation and the Corporation for Public Broadcasting, whose generous support of FRONTLINE’s local journalism initiative enables us to help create local journalism. with high impact in communities across the country.”

You can watch the NABJ Tribute to Excellence Gala on Youtube to learn more about Unresolved, “Poisonedand this year’s other NABJ award winners. Experience award-winning storytelling in Unresolved and “Poisoned” now.