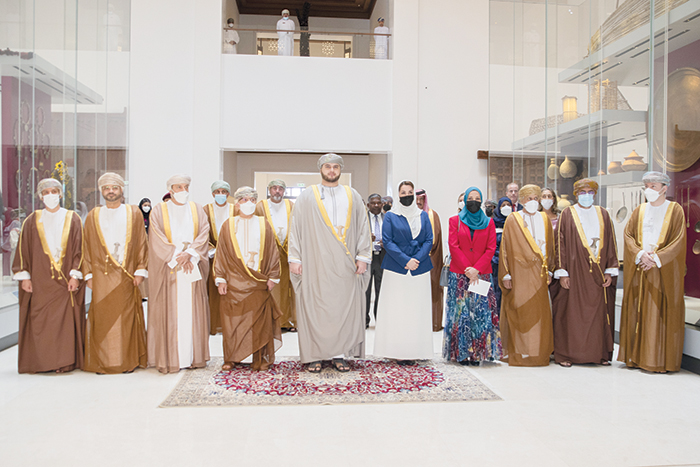 The coin conveys different aspects of the late Sultan’s personality and his role as an icon of peace and friendly relations with various countries around the world. The corner sheds light on the birth and upbringing of the late Sultan, his most important hobbies and interests, his academic studies, his accession to the throne since the dawn of the Holy Renaissance, his establishment of a state of institutions and law, its role in integrating heritage and modernity, its status as a symbol of wisdom and peace at regional and international levels.

The Corner manifests a host of connotations and concepts that transcend the borders of this country. The building will present the sultan as a unique personality who has highlighted his country and its cultural and civilizational values.

The official inauguration included selected musical paragraphs from the performance of the Royal Oman Symphony Orchestra, and a brief visual presentation of the corner, followed by the speech of the National Museum delivered by Jamal bin Hassan Al Moosawi, Secretary General of the National Museum, followed by the inauguration of the corner of Sultan Qaboos bin Said (the dearest and purest of men).

The coin has several sections, namely: the symbols of the state, the dearest and purest of men (his birth, his education, his hobbies and his interests), the renewed rebirth of Oman and the chronology from Al Busaid dynasty section from Sultan Ahmad bin Said Al Busaidi, Sultan Said bin Taimur section, Supreme Commander section, Man of Wisdom and Peace section and State of Institutions and Law section. Based on the late Sultan Qaboos bin Said bin Taimur’s quote, “I want to look at the world map and not find a country that is not bound by ties of friendship with Oman”, a special section titled “Mutual Relations” was dedicated to showcasing selective artifacts of state gifts that were presented to the late Sultan.

The Renaissance Gallery commemorates the modern history of Oman from the advent of the Al Busaid dynasty era, continuing through the era of Oman’s renewed renaissance under the able guidance of His Majesty Sultan Haitham bin Tarik. – ON A