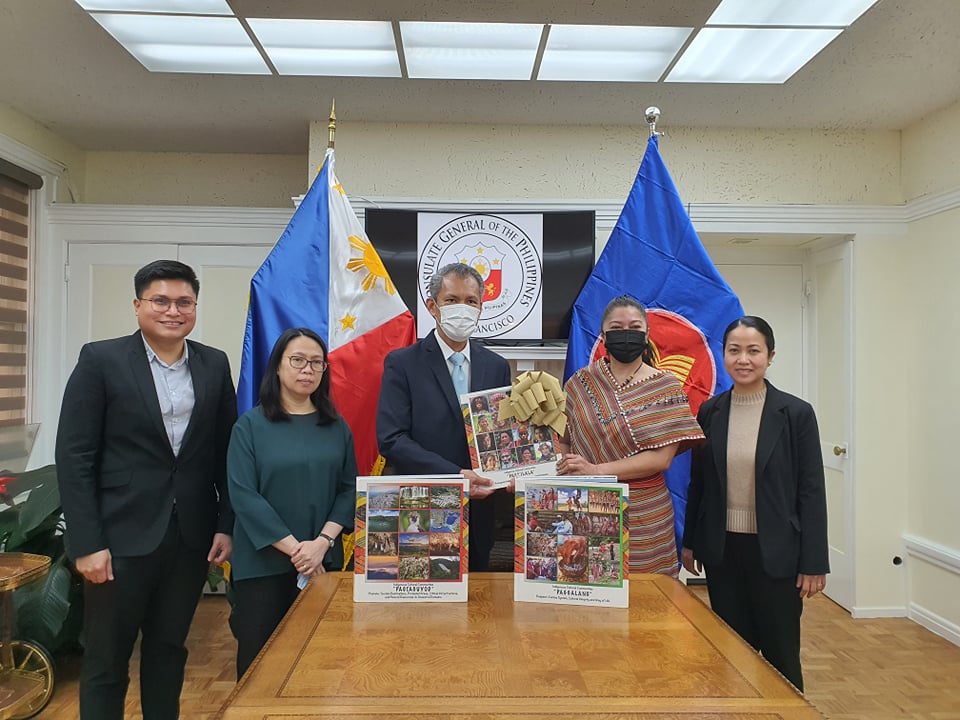 The National Commission of Indigenous Peoples (NCIP), through the Ethnographic Commissioner of the Center of Mindanao Bo-i Jennifer Pia Sibug-Las, handed over the three (3) Table Books (CTB) of its Epanaw project to the consul

The National Commission of Indigenous Peoples (NCIP), through the Ethnographic Commissioner of the Center of Mindanao Bo-i Jennifer Pia Sibug-Las, handed over the three (3) Table Books (CTB) of its Epanaw project to the consul General Neil Frank Ferrer at 447 Sutter Street. , 6th Floor, Philippine Center Building, San Francisco, California on December 09, 2021. This is the second Philippine Consulate in the United States of America (United States) to have officially received the set of BTCs that aim to promote awareness on the Indigenous Communities / Indigenous Peoples (ICC / IP) culture, their cultures and traditions, and their ancestral domains (AD) in the Philippines.

Commissioner Las made it clear that the objectives of her visit to the PH Consulate were to have a courtesy visit for the official BTC turnover and to discuss possible areas of cooperation through which the two government agencies can work together. to carry out their mandates to promote Filipino culture. specifically on the indigenous peoples of the Philippines under the consular jurisdiction of Consul General Ferrer in Alaska, Idaho, Oregon, Washington, northern Nevada, Colorado, Montana, Utah, Wyoming and northern California.
She further mentioned that the project was conceived by the President of NCIP, Secretary Allen Capuyan, who is very grateful for the opportunity given to the agency by the Philippine Consulates / Embassies in the United States, along with the assistance from the Ministry of Foreign Affairs (DFA). as the main coordinator facilitator.

The NCIP reiterates at every opportunity that through the Epanaw Project, it seeks to honor and commemorate the identities and rituals of indigenous peoples as well as to stress the importance of protecting their AD. The first CTB, “Pagkilala” (Recognize), presents ICC / IP profiles. It contains information about their history, location, and insight into their social and daily life. The second BTC, “Paggalang” (Respect), features festivals and rituals that ICCs / PIs perform in relation to important events such as birth and death, the agricultural cycle, the sacred and the secular. While the third BTC, “Pagtaguyod” (Promote), contains tourist destinations, protected areas, critical infrastructure and natural resources in ancestral domains.

The NCIP, in fact, partnered with the Tourism Promotions Board (TPB) of the Department of Tourism (DOT) for the publication of the Epanaw Project which had already been widely disseminated throughout the Philippines, especially to all NCIP employees, all mandatory representatives of indigenous peoples. (IPMR), national government agencies (NGA) and leaders of indigenous political structures (IPS), civil society organizations (CSOs), leaders of local government units (LGU), educational institutions and others stakeholders in the country.

Consul General Ferrer and Consul Vanessa Bago-Llona shared information that the San Francisco Bay Area is heavily populated by Filipino Americans whose active participation is apparent at events showcasing respective cultures and traditions. of the Filipino people, especially during Filipino-American History Month. in October to commemorate the arrival of the first known Filipinos, then known as the Indios Luzones, to the Americas. During this celebration, Fil-Am community organizations organize different activities to remind and reconnect Filipinos in the state about their original heritage in the country where their roots are from.

They further stated that: “There is also a tendency among the young Fil-Ams to put into their respective focus the need to sponsor and market the trade in goods made in the Philippines, especially those that have been produced. by ICC / IP. In this way, they are able to connect to their roots not as members of the Asian community as a whole, but especially those of their Filipino ancestry and kinship, so much so that it can be an avenue where the two agencies can work together to provide a platform for artisans from indigenous peoples to showcase and sell their creations.

They also discussed possible requests that could come from museums and schools in the state to promote advocacy for the introduction of the indigenous peoples of the Philippines to the world, their beauty, and their contribution to peace and development. sustainable development by providing them with BTC sets that can be displayed in every public consumption institution. Commissioner Las replied in the affirmative that if there are requests from the above-mentioned entities, the NCIP will not hesitate to provide copies of the BTCs simply because the TPB has allocated an additional budget for reproduction and distribution. massive.

An additional platform was also proposed which would address, in addition to all this, if the NCIP has not yet exhausted all means in traditional media like television, the Philippine Consulate will facilitate the presentation of all the materials of audiovisual presentation of the NCIP (AVP) in their LED screen in their lobby or in other places with which they are connected to promote the culture and traditions of the indigenous peoples of the Philippines.