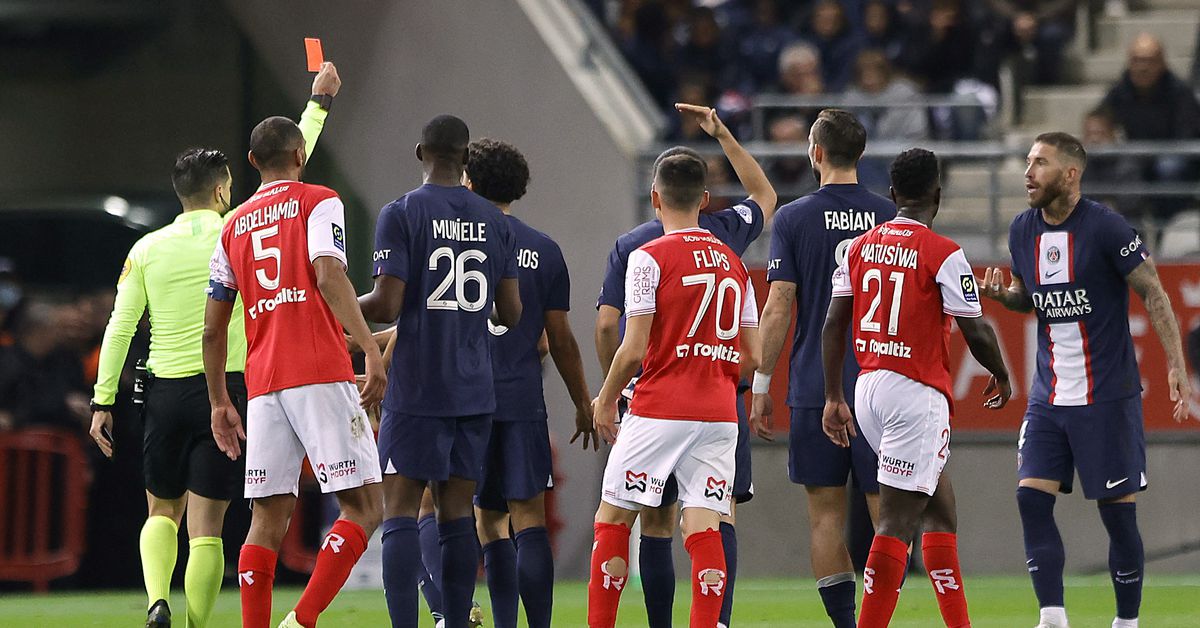 PARIS, Oct 8 (Reuters) – Ligue 1 leaders Paris St Germain played more than half time with 10 men but saved a goalless draw at Stade de Reims on Saturday to extend their unbeaten run this season.

Sergio Ramos picked up a red card as tempers flared shortly before half-time, but a revamped PSG, in the absence of injured Lionel Messi, managed to keep a clean sheet.

They have 26 points in 10 matches and are ahead of Olympique de Marseille, who lost 2-1 at home to AC Ajaccio, by three points.

Reims are 14th with eight points.

The hosts played boldly but PSG had the best chance thanks to Mbappe, who was denied at close range by Yehvann Diouf in the 33rd minute.

Ramos, however, received a yellow card after arguing with referee Pierre Gaillouste, who a moment later came back to the Spaniard and handed him a straight red card.

Coach Christophe Galtier replaced midfielder Carlos Soler with Neymar as PSG pushed for victory, but the visitors ran out of ideas and had to settle for sharing the points on a night to forget.

Earlier, second-place Marseille were under threat on Saturday as they were edged out by promoted Ajaccio.

Dimitri Payet’s 100th league goal didn’t mean much in the end as it was quickly followed by Bevic Moussiti-Oko’s equalizer and Leonardi Balerdi’s own goal.

Third-placed Lorient will put them in second place if they beat Brest and fourth-placed RC Lens will also move ahead if they win all three points in the northern derby in Lille on Sunday.

At the Stade Vélodrome, Payet opened the scoring with a kick after a handball from Cédric Avinel in the 15th minute.

Ten minutes later, however, Moussiti-Oko beat the Marseille defense to beat Ruben Blanco with a shot from the left.

The visitors took the lead two minutes into the second half when Balerdi deflected Youssouf Kone’s cross into his own goal and Marseille’s only clear chance then came in the 55th minute when Oumar Gonzalez also nearly scored a own goal.