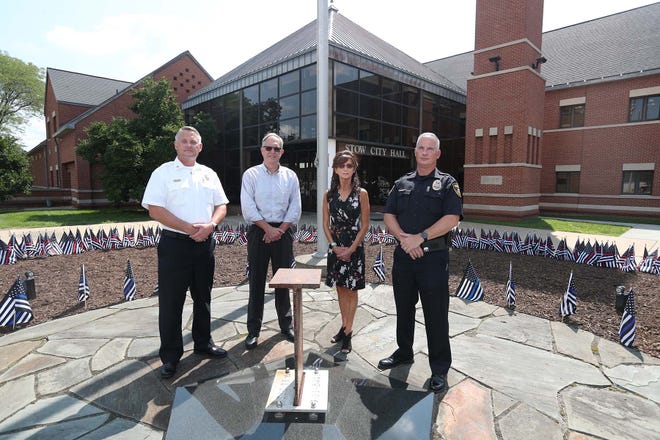 Stow commemorates September 11 with a memorial service that will feature a citywide bell ringing at exactly 8:46 a.m., the moment American Airlines Flight 11 crashed into the North Tower of the World Trade Center

Stow commemorates September 11 with a memorial service that will feature a citywide bell ringing at exactly 8:46 a.m., the moment American Airlines Flight 11 crashed into the North Tower of the World Trade Center in New York City, beginning what would become the deadliest terrorist attack in the history of the world.

Mike Hart of the Stow Fire Department will ring a bell 20 times to mark the 20th anniversary, and local churches have been urged to do the same.

“We understand that life takes you in different directions, but wherever you are at the time, whether you are at home or in your business, you will hear the bells, and we hope you stop and think.” , said the mayor. said John Pribonic.

The ringing of the bells is only part of the city’s annual 9/11 memorial ceremony, which takes place each year at the 9/11 Memorial Garden in front of City Hall.

“We’ve always had a simple ceremony,” said Parks and Recreation Director Linda Nahrstedt. “This year, we wanted to expose a little more history since it’s the 20th anniversary, but we always want to keep it simple, yet poignant.”

This year’s ceremony opens at 8:30 am with the Stow-Munroe Falls High School Choir singing “Set Me As a Seal” by John Leavitt, followed by the sound of town bells.

“It’s a fantastic way to bring our community together,” added Police Chief Jeff Film. “Those who cannot come to the ceremony can still help us remember.”

Then comes the presentation of the colors by the guard of honor of the firefighters and the police and the singing of the national anthem by the high school choir.

After Pribonic welcomes the community, Reverend Abraham Williams of Fishcreek Nazarene Church will lead an opening prayer, and film and fire chief Mark Stone will tell the story of the 9/11 attacks. The chiefs will then lay the commemorative wreath, as they do every year.

“Of course, it will be different this year,” Film said. “It’s hard to believe it’s been 20 years and being able to participate every year is an honor for Chef Stone and myself. It’s important that we take the time to stop and remember them.”

The program will conclude with the singing of the high school choir “Salvation is Created” by Pavel Tchesnokov, closing remarks by Pribonic and a closing prayer by Williams.

As a visual reminder, firefighters plant a flag for every first responder who died at the World Trade Center.

On August 31, the department has already planted 60 American flags with thin blue lines for each police officer and 343 American flags with thin red lines for each firefighter who died on September 11, 2001. They will also plant eight flags in the shape of a star of life to honor emergency medical technicians and paramedics from private emergency medical services.

“Ideally, we would like to get another 2,500 for the other Americans who died that day,” Stone said. “We don’t want people to forget and we want them to see the impact this has had on us, our professions and the country.”

Stone had originally planned to place the flags along the exit of the fire engines at the main station, but ultimately decided to place them in the memorial garden, so that they could be part of the ceremony.

The ceremony has taken place in the garden since its consecration in 2012.

The garden cost around $ 30,000 and includes an I-beam from one of the fallen towers.

The Ports Authority of New York and New Jersey donated over 2,600 pieces of steel and other artifacts to community groups, museums, fire stations, town halls and military bases around the world between 2006 and 2016. Municipalities had to request an exhibit, and a federal judge had to approve the release because the material came from a crime scene.

Stow received his piece just days before the 10th anniversary of the attack and kept it in the city security building.

“It’s such a small fraction of what happened that day,” Stone said. “We had it in the train station so the guys could pick it up and smell it. It was a great thing for us and we take it very seriously.”

The room is now on display in the center of the garden, atop a five-sided piece of granite that represents the Pentagon, where 184 people were killed.

“You can actually touch it too, and it’s very powerful for the people,” said Pribonic, who was on the council when the city received it.

The garden is flanked by two square-based poles, representing the Twin Towers, and a central pole representing Shanksville, Pennsylvania, where 44 people were killed.

To better integrate the community, the Stow Arts Commission asked residents to paint stones commemorating the attacks and place them in Memorial Garden. The city originally put around 200 stones in the garden for residents, and there are around 25 left.

Doug Berkey, a native of the Shanksville area and a United Airlines flight attendant, previously painted one of the rocks, which is now on display in the garden. “It’s amazing what people have done,” Pribonic said. “They can show their individuality and be a part of this ceremony because we want it to create community.”