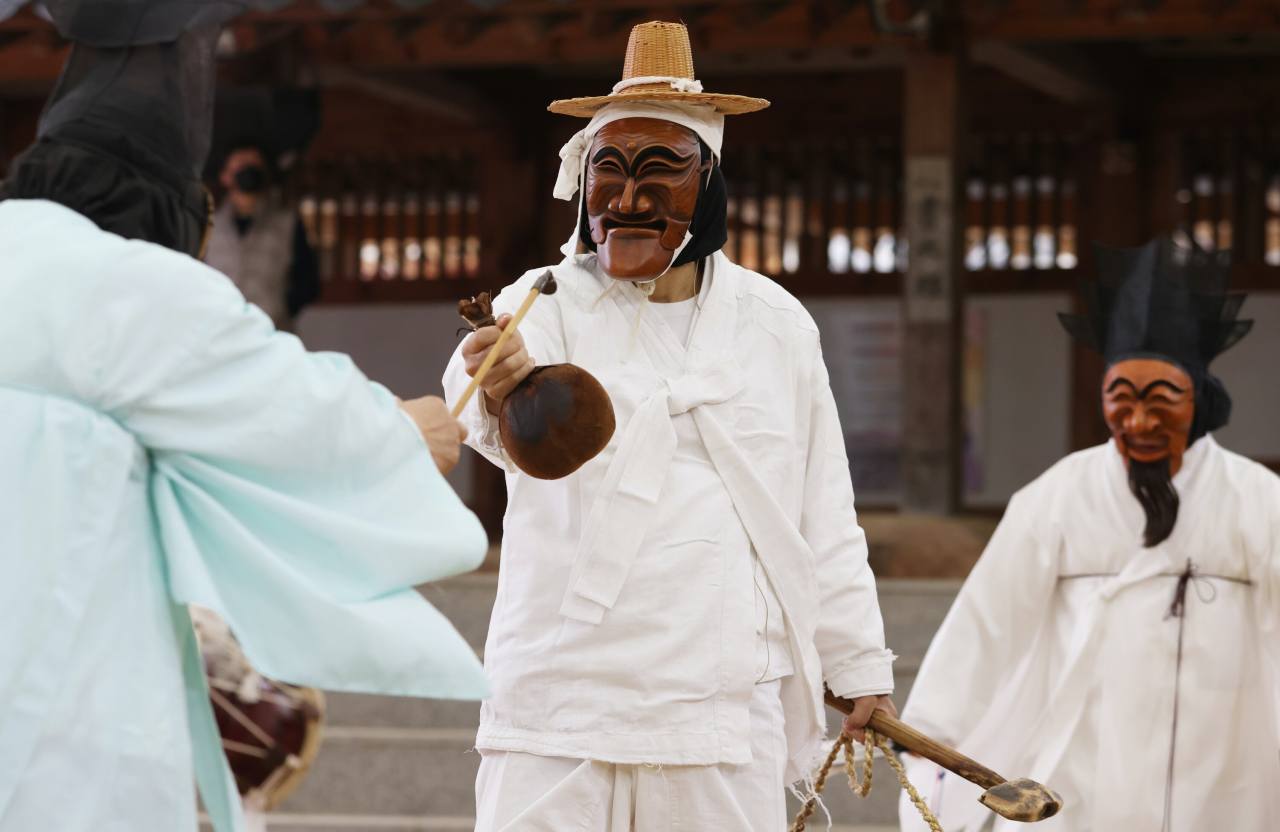 [Visual History of Korea] The Hahoe Mask Dance, a humorous social satire that pokes fun at the elites The butcher (center) tries to sell bull testicles to the scholar (left) and the noble during a

[Visual History of Korea] The Hahoe Mask Dance, a humorous social satire that pokes fun at the elites

The butcher (center) tries to sell bull testicles to the scholar (left) and the noble during a Hahoe Byeolsingut Talnori mask dance in the Hahoe village of Andong, North Gyeongsang Province. Photo © Hyungwon Kang

Humor has been the essential fat that fuels ordinary Koreans’ joie de vivre.

Among Korea’s many humorous music and performing arts, Andong Hahoe Byeolsingut Talnori, or the Hahoe Mask Dance, gives performers the courage to say and do a multitude of outrageous things at the expense of the social elite.

An American diplomat left a first-hand sighting of the butcher, “baekjeong” in Korean, in the 19th century.

“These men are pariahs in Korean society, just like butchers, tanners and gravediggers, or others who handle dead things. All were well over six feet (183 centimeters) tall. One of them had a flowery complexion with red hair, a bushy red beard and bright blue eyes,” wrote William Franklin Sands (1874-1946), who worked in Korea in the 1890s documenting Korea in his 1930 memoir, “Undiplomatic Memories: The Far East 1896-1904.

The Silla kingdom had a caste system, and when Silla gave way to the Goryeo kingdom in 918, it inherited a nomadic people who performed socially undesirable tasks such as butchering animals. Butchers were among the social outcasts called “Yangsucheok”.

King Sejong the Great named the Yangsucheok nomads the “baekjeong” class, akin to the “untouchables”, and integrated the bandits and nomads into the mainstream of the Joseon era, which was a predominantly agrarian society. Thus, during the Joseon period, baekjeong became a common name defining a group of nomads as well as the occupation of butchers.

Scholars believe that nomadic baekjeong butchers were originally from ancient Khitan and Jurchen peoples. The Khitans have their roots in the nomadic people of Mongolia and the Jurchens were Tungusic-speaking peoples of East Asia.

Baekjeong, or butcher, in the mask dance of Andong Hahoe, belittles the elites of the upper social class, the yangban (noble), the seonbi (scholar) and a Buddhist monk. Buddhist monks had considerable influence in the Goryeo Kingdom as Buddhism was the state religion, as was the Silla Kingdom.

In the dance-drama of the mask, the butcher mocks the noble and the scholar for wanting to buy bull’s testicles, presented as aphrodisiacs.

None of the masks have symmetrical facial features, giving each character a unique and often contradictory appearance depending on the direction from which they are viewed.

The Noble Mask has more lines on one side of his face when asserting his authority and age, while the other side has fewer facial lines, to project youthful vigor when courting Bune, the female artist.

Although there are 13 traditional mask dances in Korea, Andong Hahoe masks are made with real wood and are not burned after each performance, as is the case in other Korean mask dances.

Monk and bune masks are seen during a performance of the Hahoe Byeolsingut Talnori in Hahoe, Andong, North Gyeongsang Province. Photo © Hyungwon Kang

The Andong Hahoe Talnori is based on a legend about a bachelor from the Huh family of Goryeo Kingdom who prayed to save a village from a lingering famine and pandemic.

Huh was inspired to please the “seonangsin”, or village gods, with a masked dance to eradicate the famine and disease that was sweeping the area.

“Bachelor Huh had to make 12 masks in solitary confinement for 100 days without seeing his 17-year-old girlfriend from the Kim family from a neighboring village. But on the 99th day, his girlfriend crossed the line and threw a eye in the workshop and met eyes with Huh. He became cursed and died spitting blood. Huh’s girlfriend killed herself to follow Huh,” said Kim Jong-heung, 67, l current ‘sanju’, or spiritual leader, of the small village of Hahoe in North Gyeongsang Province.

“A seonangsin hut was built to remember the Huh-Kim couple’s love story,” Kim said. An annual winter memorial rite called “dongje” is held at the dawn of the first full moon of each new year on behalf of the couple, Kim added, explaining that it is held to console unfulfilled love and pray for the village well-being.

The responsibility of the village’s spiritual leader means having a spiritual connection to the village gods, according to Kim, who served as sanju for 27 years.

The gaksi, or bride, mask has a sealed mouth, one eye looking down without ears, a reflection of the advice given to young brides to “close your eyes for three years, be deaf for three years, and be dumb without saying anything for three years “. years,” Kim said.

The female artist, Bune, mask has a mouth opening, while the grandmother’s mask has a large opening, reflecting social tolerance for older women speaking out as they are considered to have earned the right to express their opinions.

The mask of Imae, the servant, has no jaw. Bachelor Huh died without completing the 10th mask when he was visited by his much-missed girlfriend.

The unusual hairstyle of the bride’s mask is found on a gilded bronze bodhisattva statue Baekje, a visual clue to the ancient nature of Andong Hahoe masks.

“During the past two dongje, I have prayed for the departure of the COVID-19 pandemic. In order to receive the village gods as the official spiritual leader of the village, for several days before the dongje, I keep clean by refraining from visiting a funeral home or meeting sick people, and staying away from my wife,” Kim said.